Ok, it’s been a while since I’ve been on these forums! It looks like its quieted down a bit since I was last sifting through these pages. None the less, I’m back (with a new account) and ready for a new build. My first set up was on a 2001 ranger, with no compressor, just a Schrader valve and a manual pull valve controlling a pair of Wabco horns that my dad pulled off of a quarry tractor (with permission from his boss) when he was in high school.

On my next truck (2001 F150), I had essentially the same setup, but with a compressor, and having learned a lot more about onboard air system, all the right fittings and gadgets needed to control everything safely.

Today I have a new to me 2020 F150. I want this truck to be set up right with working air horns, and onboard air for tools (light duty) and tires. There are a couple things I want to modify this time around. I think I have it mostly figured out. But since I have a couple weeks to order everything and prepare for a Father’s day 2022 weekend install, I figured I would solicit feedback on my plan and see if there’s any good ideas out there or any concern around my strategy.

This time, I’m going to run power to a 7 way outlet mounted inside the bed of the truck. I’ll have a 7 way plug wired up to the compressor which will also be mounted inside the bed along with the tank. When the 7 way is plugged in, the system would normally. If I wanted to plug in custom 12v tools/accessories, I could also use that outlet for that. A switch on my PA system panel will override the pressure switch on the tank and ultimately the compressor. The air solenoid will tap into the stock horn circuit but will have a kill switch in the cabin. So normally both the stock horn and the air horn will sound simultaneously, but if I wanted, I could turn off the air horn.
I’ll attach some diagrams of my plan. If anyone has any input, help me out. I would appreciate it if anyone caught anything that I might have left unprotected anything that could be done better. 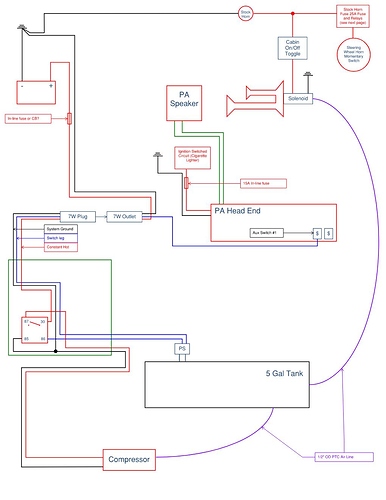