I’ve probably asked too many questions in this forum about compressors, but I guess it’s helpful for others so they don’t have to ask too. I’ve mentioned before I want to setup a horn ‘rig.’ Actually going out in the woods and doing lengthy recordings, which is why I got this. It being on clearance was probably the biggest driving factor though. 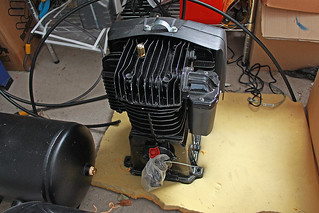 It puts out a whopping 26.9cfm at 175psi, which would essentially allow me to keep up with anything on a 20 gallon tank for nearly two minutes, except for the mighty M5 of course. While I was able to get quite far with research on horn air consumption, I’m stumped on the motor part. I’ve figured a run of the mill cheap 420cc gas motor could get me 25.2cfm at 175psi. That’s still decent, but I’ve been second guessing using gas because I also want to use this as a shop compressor, and it would be nice to have something a bit quieter than gas. It seems anything involving those 230 volt electric motors is out of the question. I’ve heard about winch motors being used on York’s, and based on random calculations, winch motors seem to have about 75% efficiency of an AC induction motor at higher rpm’s being DC and brushed. It seems most winch motors can run on 24 volts, which would be the plan. Using two 12 volt deep cycle batteries to run the compressor for a significantly greater period of time down to around 12 volts. I’d use two 6hp winch motors to drive it, which at 75% efficiency of an AC induction motor, should give me an equivalent of 9 AC horsepower.

The question I have is, would it be worth it? I’m not sure if brushed DC motors are really built for heavy duty usage like running a two stage compressor for a 40 minute period over 4-5 hours a few times a month. Trying to be realistic rather than optimistic, I’d imagine I’d toast the motors within a month or so requiring a full rebuild (mostly because of the brushes). Then again, I’ve never operated a winch motor before so perhaps I’m underestimating their abilities. My goal is to run a portable car and garage setup on electric power. I can see how this is probably out of reach though without spending some extra big bucks.

Dan, I sent you a personal message about this, but I figured nobody really checks their messages anymore on here. I’m not the best at it myself.

Using a winch motor is a good idea, but I’d switch to D cell batteries instead which are basically semi-truck/industrial diesel batteries.

You could also look at a horizontal shaft gas engine and use a centrifugal clutch as a cheaper option.

Thanks. I’ve never seen more than six D cell batteries used at the same time. Is there a certain way to use a large amount of them in a compact box?

I had been considering a 420cc (horizontal shaft) engine and even if I ran it in the car for garage air, noise might still be an issue. Are winch motors capable of spinning 1500+ rpm under load of a compressor? I’m not sure how slow some of those York setups are. It would have to be a double winch, possibly even a triple winch setup since higher horsepower winches don’t really seem to be available at low market value. Highest powered winches I’ve seen are 6hp on their own, and that’s barely enough to power this thing.

I’d look like a wild animal with a setup like this, but I guess that’s part of the train horn life.

This is what I meant by “D Cell Battery”:

I ended up deciding to do away entirely with the two stage compressor and bought a York 210 and a winch, assuming the project should be reasonable. I’ve run into a lot more problems than I expected though.

Despite the oil mod being done, and the crankcase vent installed, the York gushes oil out like a fountain. To the point I lost 4 ounces of oil in 3 minutes and nearly seized the compressor. I plan on resolving the problem (hopefully) by using an oil filter and cycling the oil back to the compressor.

The issue I’m stumped on is the winch. Quite clueless on how they work, I put together some short 2 gauge jumper cables and let the winch go at it. I got from 0 to 120psi with 5 gallons in a mere 45 seconds. The compressor gradually slowed down though until it was down to a few hundred rpms, so I decided to disconnect it. A few seconds later, smoke started to escape from the winch, so I knew it suffered a meltdown. I knew the duty cycle wasn’t going to be great, but that was definitely a surprise. The winch was still a bit warm in the morning, and smelled awful.

After researching the duty cycle of compressors, I managed to get it running again and I opened the valve from the tank to hold the charge to 20psi knowing that would require significantly less power. Despite the pressure not increasing this time, the winch gradually slowed down once again and got very hot. The motor still smells horrible, so I’m assuming it’s done.

I guess this is the reason the Oasis guys use golf cart motors. Regardless, I’m a bit perplexed, seeing as others have used the same motor, with the second setup being practically identical to mine, being direct drive. The first photo is my setup during preliminary work. The following two links are the other setups. 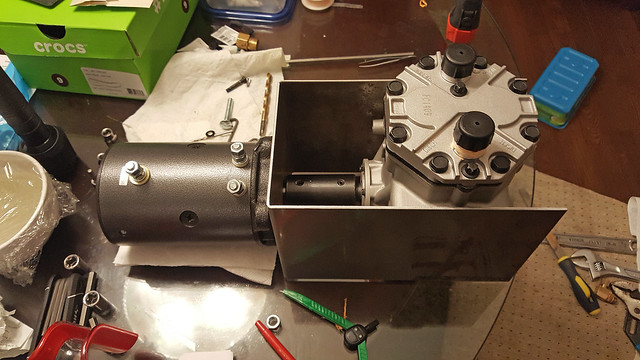 I’m a little stumped as to where to go at this point. I could buy another winch and try to run it on a belt to make the winch draw significantly less power. Though I have no guarantee the winch won’t just slow down again, meaning I would’ve burned another $250. The winch is rated for 4.5hp, but from research online, it seems most winches would only be able to hold 10 to 20 percent of their rated power consistently without reenacting Chernobyl.

I’d like to maintain at least 6-7cfm from this setup so I don’t keep asking myself why I didn’t just buy more Viair 480c’s instead. I’m guessing I need a golf cart motor, or something similar. I’ve seen plenty online, but all seem to require 36 to 48 volts and spin at 3000+ rpm. The max I’m comfortable with running is 24 volts, and I’m aware 3000rpm is way too much for a York. I’d plan to use this as a shop compressor as well, so it’s likely up to 100 gallons an hour would need to be filled. Not consistently of course, maybe a few times a month.

Does anyone know what motors might be best for this application?